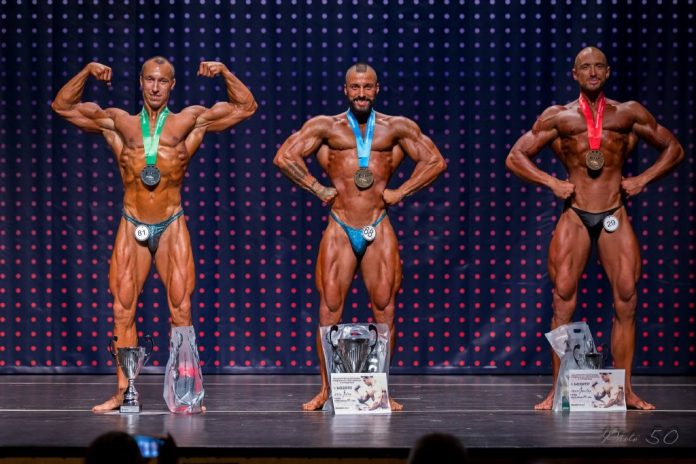 Taking part in the competition and coming out on a stage is a feeling that is really worth it. But there is a long and challenging preparation you need to undertake to reach your goal. What is it all about?

In 2015 I took part in my first bodybuilding competition. As for the idea of competing with other people and applying for competitions, I decided about a year before the contest. I started to adjust my workouts along with the diet adjustment. Preparation is, of course, an individual matter, because each of us is different.

I’ll try to roughly describe how I am preparing for the competition.

For the first three months a volume training is going on. This means an increase in complex carbohydrates and proteins intake. At this stage I try to gain as much muscle mass as possible.

During the following two months, it’s about carbohydrate reduction, protein intake remains the same. Even at this stage, training is still volume-based. As a result, intensive fat burning takes place in the workouts, and with the simultaneous reduction of carbohydrates, fats are converted into energy and burned. As for feelings, I feel a little exhausted, but one can still handle it.

A stronger pre-contest diet starts about a month before the competition itself. For the next three weeks, we significantly reduce carbohydrate intake, ranging from 50 to 100 grams per day. I am exhausted enough at this stage, but I try to keep the training on the same level, despite the fatigue. It is really demanding on the psyche and physical condition. But during the last week, everything is decided. It’s the most challenging phase of the whole preparation. If it fails, the whole effort becomes useless.

So, during the last week, there is a supercompensation, which happens roughly like this: The first day I start with the so-called spillover. This removes the last fat and at the same time glycogen is pumped off during workouts, so that it can be filled as much as possible in the carb-loading phase. Spillover means 10 liters of reboiled water and 1.5 kg of chicken cooked only in water, not flavored. Those numbers are individual, of course. The next day is the same and the third one as well. On the fourth day until 3 pm, I take 1 kg of chicken breast and drink 6 liters of water. Then after a 2 hour pause begins a second phase, the so-called carb-loading. Since 5 am on that day, I’m loading the carbs. I use basmati rice only, because it takes less water, and rice breads. I’m eating 200g of rice every two hours, all of this, of course, with no water. And reiterating this up to the competition day.

The competition day is very challenging

It is not easy on the competition day, as it is already the third day without water. There is no special preparation on that day. Proper carb loading is very important. This means that I add fast carbohydrates, while of course, still taking the complex ones. Since morning I have to eat rice with jam (for example), to fill up the glycogen, which I usually manage to do. As a result the muscles look optically larger, as glycogen can triple its volume when properly supercompensated. Therefore, this effect is used on stage. The overall contest form depends on the last week of preparation.

To handle it all, I have to set myself mentally, it can’t be done otherwise. I’m focusing on my goal, to handle the supercompensation properly. That is because it is connected with terrible tiredness and depression, so if someone wants to try it, he or she should be in psychological well-being. In the pre-contest diet I lose more than 10kg – while in the volume phase I get at almost 100kg, the contest form is just over 80kg.

Do you want to compete?

If you are a young guy and you would also like to take part in competitions, I would definitely advise you to start as soon as possible, as a junior. I started later and that’s probably the only thing I regret. Bodybuilding is very demanding physically, mentally and financially. But I’ll tell you when you stand on the stage once, it’s worth it! My advice is: Try it out and see if it catches you or not!

See also the video on this topic.

How to cook quickly? Broccoli cream

Get the latest information from the fitness world